The AC on a friends 6n2 GTi isn't getting cold and the low speed fan doesn't click in.

I have had a pressure gauge on the low pressure side of the system and there is gas in there, when turning AC on you can hear the compressor click in, and out again when you turn it off.

Also when driving along the AC gets cool, not cold but cool-ish,

after looking at it all idling etc I noticed that the low speed fan does not come on when AC is turned on, The high speed clicked in when sat in traffic the other day they said so I believe that the actual fan is working, and I have spun it by hand so I know it's not stuck.

Is there any common issues to check before I start swearing at the car and threatening to set fire to it?

There may be pressure, but is there sufficient quantity of gas. If it's sort of working, then that would tend to indicate it needs regassing.

Off the top of my head there's a wire on the top of the compressor, tricky to get at. I think that is the trigger for the fans, but best review a diagram rather than rely on my memory.
Top

Well at one point the pressure was in the red on the gauge..but I get what you mean about the actual gas.

My main issue is the lack of fans. It has had the clutch changed so now pondering if they forgot to plug back in something when they had it all apart,

Fan control unit is difficult to access, towards the front under the left hand wing
Top

I’ll try shorting the pins on the fan switch today too and see if that works. If they fan does spin at slow speed I guess that means the fan box is fine?

High speed defo works as had it on last night after leaving the car for about 20 mins idling so the fan works that’s for sure.

2-3 and I can hear the relay click and second later the fan is going full chat,

1-2 nothing! So guess this is pointing to the low speed box being shot or unplugged then?
Top

So, consider that your friend's car has two different issues, no slow speed for the fan and not enough refrigerant charge in the chiller system to lift the system pressure high enough to switch the fan on - unless of course the fan is configured to switch on whenever the clutch is engaged on the compressor.

For cooling the engine when it needs extra cooling, as the coolant temperature rises to say 100C the fan will get switched on at slow speed, if that cooling is enough the fan will switch off at say 80C, now if the fan running at slow speed is not enough to cool the engine down, when say 120C is reached, the fan will run at fast speed and only switch back to slow speed at 110C - all these temperatures are a rough guess to give you an idea as to how the engine coolant temperature control is achieved using that 2 speed fan. So, normally in use, you or your friend would not notice much happening if the car starts to get too hot and both the fan speeds were working, but if the slow speed has failed, I'd expect that the temperature gauge would show an increase before the fast speed got switched on and pulled the temperature back down.

Yet Another Edit:- you do know that the fan only ever runs at fast speed when requested by the AC chiller?
Top

I found a post on Club polo staying what pins do what. It was 1-2 for low speed but I tried all combos just encase. From what I read shorting pin 1-2 should start the fan low speed, this is separate to AC demanding low speed fans.

The post on there also said that it was high speed for water cooling and low speed for AC I think but I will check again, either way low speed doesn’t work.

The high speed clicks in about 98 I think it was, when it was clicking in last night the dash said normal and wasn’t going over the 90 mark (the temp gauge is normalised, so shows 90 between mid 80 and 100 or so),

I will speak to my mate as he made a fix for the fans on his Leon, as they are prone for the low speed fan going belly up, so he made new resistors.
Top

My understanding of what and when each fan speed is used is based on 9N etc cars, and I must say that it sounds very logical and you do want to control the engine temperature more closely and so avoid over cooling, but for the AC chiller system you do not need to bother as it can handle the fan running at one ie fast speed only as over condensing is probably never going to happen.

Edit:- remember if the AC chiller system is very short of gas, then the pressure sensor will protect it from going into vacuum etc and so inhibit the chiller compressor clutch operating and so inhibit the cooling fan from running. Measuring pressure at the low side with what sounds like just a DIYer bottle gauge is really only for checking the standing, ie car switched off pressure, so any red/green zones pertain to that ie standing pressure reading, now if the low side pressure was getting high, then I'd think that the compressor is not switched on - or someone has dumped too much R134A into the system - which again would stop it running as the pressure sensor will protect it.
Top

This may be of help 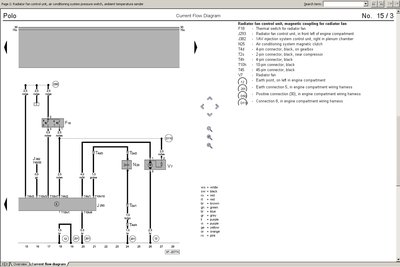 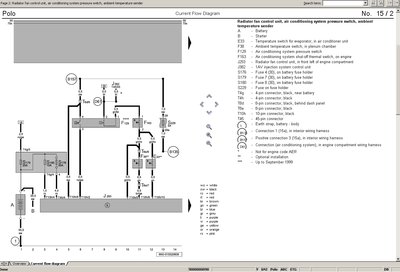 Rum - I get what your saying about the lack or too much gas. I didn’t visually check but I could hear the compressor klick in when I turned auto on, so it sounds like the pump is running, just that the gas isn’t being cooled when stationary as the fans don’t work.

Regardless of gas levels etc shorting pins 1-2 should turn the fans on low speed, as this by passes all the AC controls.

This to me says it’s poss the fan controller box under the battery which is playing up so I will have a look next week I next see the car for a bit. Once I get the fans working on both speeds the AC can be regassed and hopefully that’s sorted.
Top

I agree, as I said probably 2 different problems.
Top

How hard is it to change? Where at the actual bolts which hold it in place? I quickly whipped the battery and battery tray out but could t see anything obvious in the right location,
Top

Two bolts/screws on the top - this link shows them