Hi all, I recently put a new (used) AVY engine in my GTi and have noticed on start up it spits out dark stuff and where ever I park it will leave a black patch where my exhaust points down. If I rev the car up it will be quite smokey and smelly. When I put my foot down the car feels fairly normal but I can sometimes see a bit of a smokey haze behind me. It has also been burning quite a bit of oil so I presume this is an oil leak problem, I'm guessing it would be the valve stem seals or piston rings? Any advice or help on what the problem could be would be great help. Thanks
Top

My AVY has a similar problem after a head swap / reversion, smoke on startup, plus oil consumption.

My diagnosis is that it's valve stem oil seals too. It didn't use a drop until I started messing with heads, I think the seals have lost elasticity while out of the car.

Race you to prove it ?

Thanks for the reply mate

Do you have smoke when you rev the car or if you give it the beans? I'm hoping it's the seals but I don't wanna go to all the trouble of sorting that out if the problem is the piston rings. I don't know if there's a way of telling if it's the rings? If you have any advice or manage to get any where with your car then please let me know.

Have a read here

The car has its original head on and is smoky on initial start up with a blue cloud starting after about 10 seconds, I have two theories:

1. The original head was off the car for 6 months. in the intervening period the seals have hardened, so that's my problem.
2. The light hone I did has messed up the seal between the rings and the bores, meaning I need to re-ring it.

As the spare head was from an engine with unknown history, it was always possible there was an issue with it, and it has been stood for several years

I have had someone follow the car, after 1/2 a mile or so it seems to become smoke free, even when I boot it after a period on the overrun..... but I think I have seen puffs in that scenario.

The car is off the road until I sort it. You can do the valve stem oil seals in situ, so that seems to be the sensible thing to do first

Having a re-read of your symptoms the spitting and black patches seems to indicate your issue is worse than mine, and it's unburnt oil
Top

Just read your thread and you really have had a lot of trouble, I don't know how you haven't given up haha

I haven't had anyone follow me so I don't really know what it does. Like I said, it smokes if I rev it up and I've occasionally seen smoke when I boot it.

Yeah buying unknown parts is a nightmare. I was asking the breaker questions about the engine before I bought it and he said it was fine and ran well. When it turned up it wasn't the engine he sent me a picture of and it was very grubby with sealant sticking out of the cam cover, I was very disappointed with it tbh.

Thanks for your help
Top

My thread stops short of the swap back of the original head after being machined flat. I'm quite quick at doing head swaps now.

I think it's quite interesting that what we have seen is three engines where the head has not been used for a while..........and all three are smoky

Ah ok so a compression test probably isn't gonna help much then. It's going through oil at quite a rate and I'm gonna have to buy more to keep topping it up.

Yeah maybe the seals dry out when the engine has been out of the car, however my polo sat for 3 years without running and never had any issues with the engine until last December I hit a huge puddle and sucked up a ton of water resulting in this......

It's very frustrating because my original engine was a very good one, it was very well maintained and very clean internally. Now I've got this s**t one haha

If it were the piston rings, would the cylinders need boring or honing to fit new ones? Even thought the car sounds normal

Apart from the smoke and oil consumption I have noticed some hesitant starting, it always starts but when cold it is hesitant, when the car is hot it starts well. 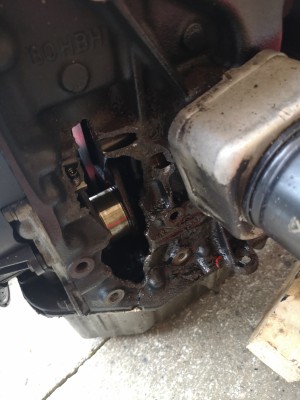 Wow, hydraulic locking with a rod chucked out the side for good measure. Looks like the puddle was also called the Thames estuary

If you are fitting new rings then the bore should be honed. That's a surface finish treatment, not material removal so the same pistons are fine. If you don't hone, the rings will not bed in and you will almost certainly burn oil

Have you looked at the plugs. Mine too can be rough / misfiring for a very short period of running. It's plug fouling from the oil, which then burns off as temperatures rise.

Looking more and more like we have the same problem.

I really wish I hadn't given my bores a light hone to remove the combustion deposits from the top of the bores.
Top

Oh ok, sounds easier just to fit another engine. Yeah I wouldn't have the balls to even attempt doing anything to the cylinders haha

Yeah I took all the plugs out about a month ago (they're brand new) and they were all very black, not oily, just black.

Yeah it does seem we have a similar problem, I feel a little bit better about that now haha
Top

Well, before fitting another engine I would certainly look at doing the valve stem oil seals.

The traditional way is head off, remove all valves, refurb with new seals, grind valves in maybe after doing valve guides.

Modern way: head remains in place, valve springs removed using a top mount compressor, valve stopped from falling into the cylinder by compressed air. There's an alternative if you do not have compressed air.

Yeah I did see a couple of videos on YouTube of people using that tool, it didn't look to bad, just quite fiddly.

I'm tempted to give it a go soon and see if it fixes the problem, I'll be pretty annoyed if it doesn't though haha

I don't have compressed air so what is the alternative? I saw one guy on YouTube put some thick nylon rope down the spark plug holes haha
Top

That's the alternate, not sure about thick though......... rope down move piston up to compress against the valves, remove, replace, rotate engine backwards, remove rope.

Quicker than a video isn't it

Nice haha, I'd never heard of that before until I saw the video haha

What's the next plan of action for your engine then? Guessing it's not your daily?
Top

No it isn't one of the daily cars any more....... I have a replacement so I can do this at my leisure, but I should get it done before the MOT runs out. It's a lovely go kart to drive
Top

That's alright then haha, mine is my daily so it's more of an issue because I don't want to have to get rid of it as I've had it quite a long time now but this engine being a bit of a s**t has left me feeling a bit disappointed

I really don't want to have to use my other car all the time, especially in the winter haha

It doesn't seem to smoke on idle when it's warm but as I said, it does when revved etc, do you know if it would fail an mot or emissions test?
Top
Post Reply
17 posts