In my UP there is already a wire in T73b/11, which is black/gray and I think 1mm2.
EDIT: I *think* this wire comes from SC18A which had a 7.5A fuse. However I removed this fuse during my reverse light problem, and never put it back, and I experienced no problems yet.

I don't have any DRL lights in my car so no idea what these wires are used for. Do you have any idea?
But I get your point about T73b/11 if I want to use SCL in the future though.


What way do you prefer?

Yes, this wire I have prepared already, I only need to put it in the car.

Here is a photo of the headlight from our Up: 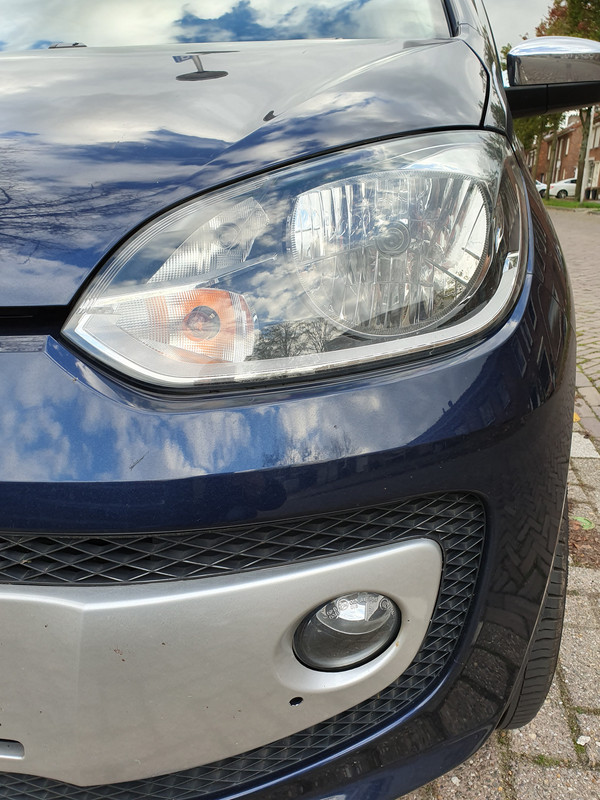 Here you can see T73b/68 which was already present: 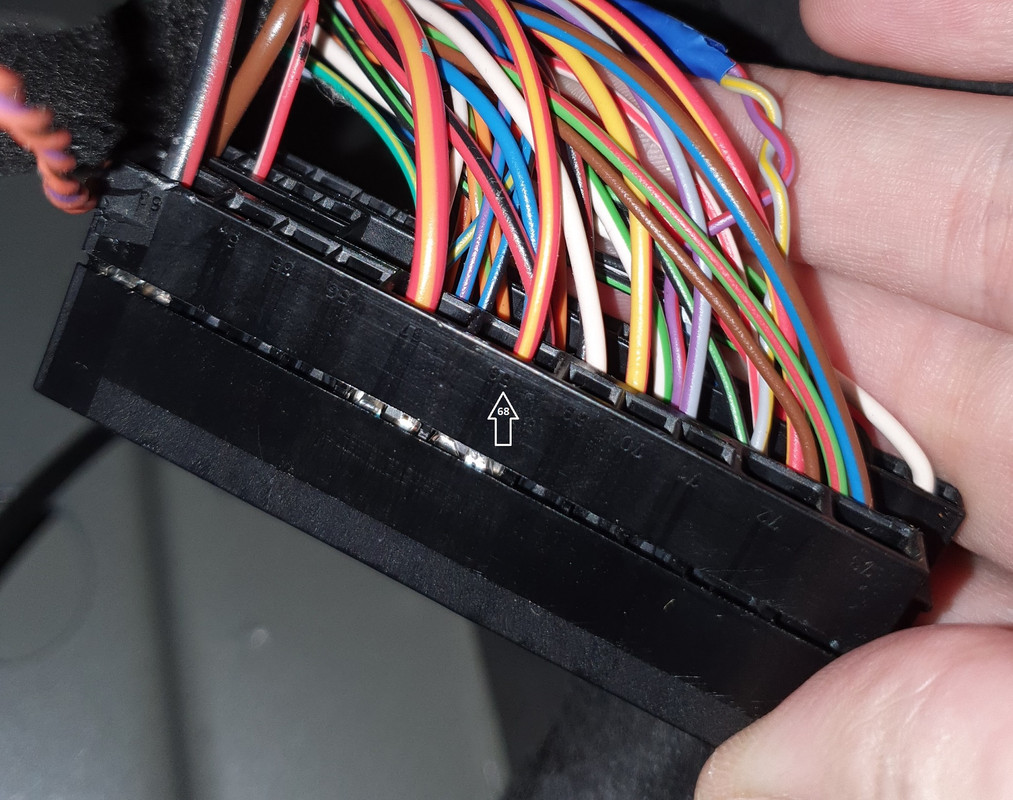 Here you can see T73b/11 which was already present: 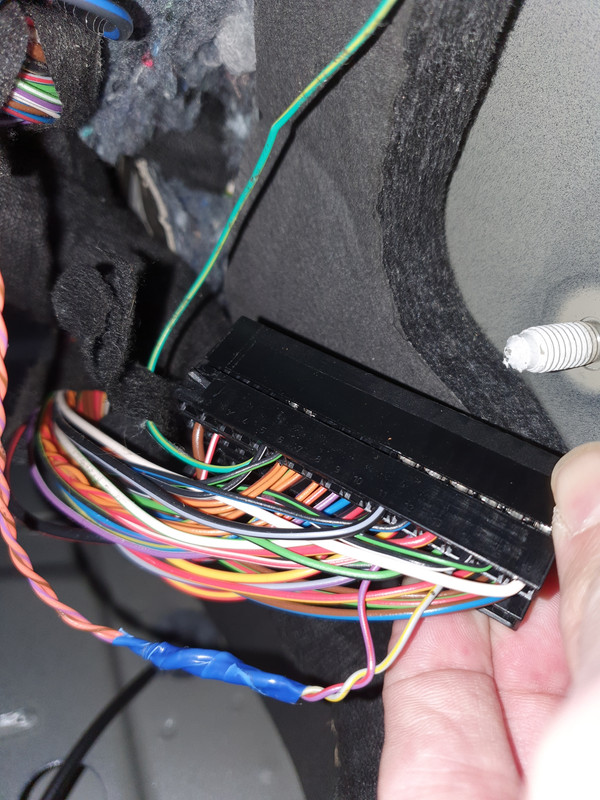 In my UP there is already a wire in T73b/11, which is black/gray and I think 1mm2.
EDIT: I *think* this wire comes from SC18A which had a 7.5A fuse. However I removed this fuse during my reverse light problem, and never put it back, and I experienced no problems yet.
It is a +15 power supply (from SC18) for non-bluemotion models (BCM 087) and automated gearbox, but now you have a BCM 090 and the rules of the game have changed.
For SCLs with BCM 090, that wire must be 1.5mm2 with +30 power protected with a 20A fuse.
The location of this 20A fuse is SC50, but your current installation for front fog lights (without BCM control) with 15A fuse in this location is not useful for the NEW electrical installation of SCLs + front fog lights.


I don't have any DRL lights in my car so no idea what these wires are used for.
You must have the DRLs, they are mandatory for your car (MY).
T17/3 + SC22 + T3d/1, T3g/1 (installation without BCM control). This installation must be isolated when installing the automatic lighting system, and make a new installation with BCM control, T73b/29 + 3b, 5a to T3d/1, T3g/1.
Do you have any idea?
Yes, in your model year, they are rear turn signals (49) 5 left, 6 right.
The assignment of these two pins is normally for the front side lights on PQ25 models in which it is necessary to differentiate the front side lights from the rear side lights. (in the case of bixenon/led headlights, etc)
By means of BCM coding it is possible to change the assignment of these two pins (5b, 6b). VW's tricks...

What way do you prefer?

Yes, this wire I have prepared already, I only need to put it in the car.

My car has DRL ?? I seem to learn new stuff every day ^^
I just checked my front lights and there are 3 bulbs:
- turn light bulb
- dipped/main light bulb
- parking light bulb

Okay, more to rewire then!

Yes your VW up! Does have DRL as it is mandatory here in the Netherlands. It indeed has a dual filament bulb with parking light and DRL.
Top

Yes, it is the same bulb with two filaments, for parking/side lights (less bright) and daytime running lights (brighter). 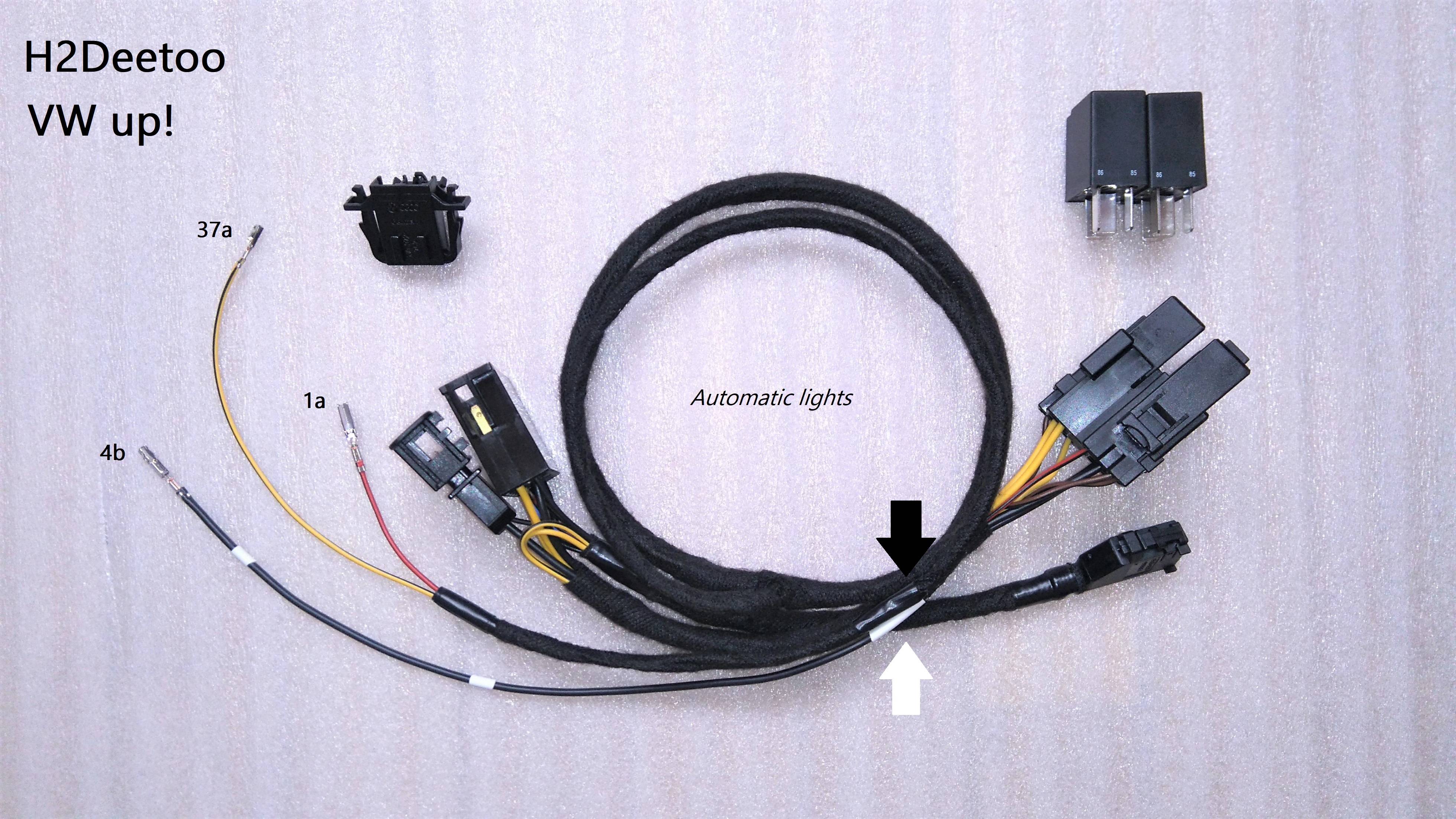 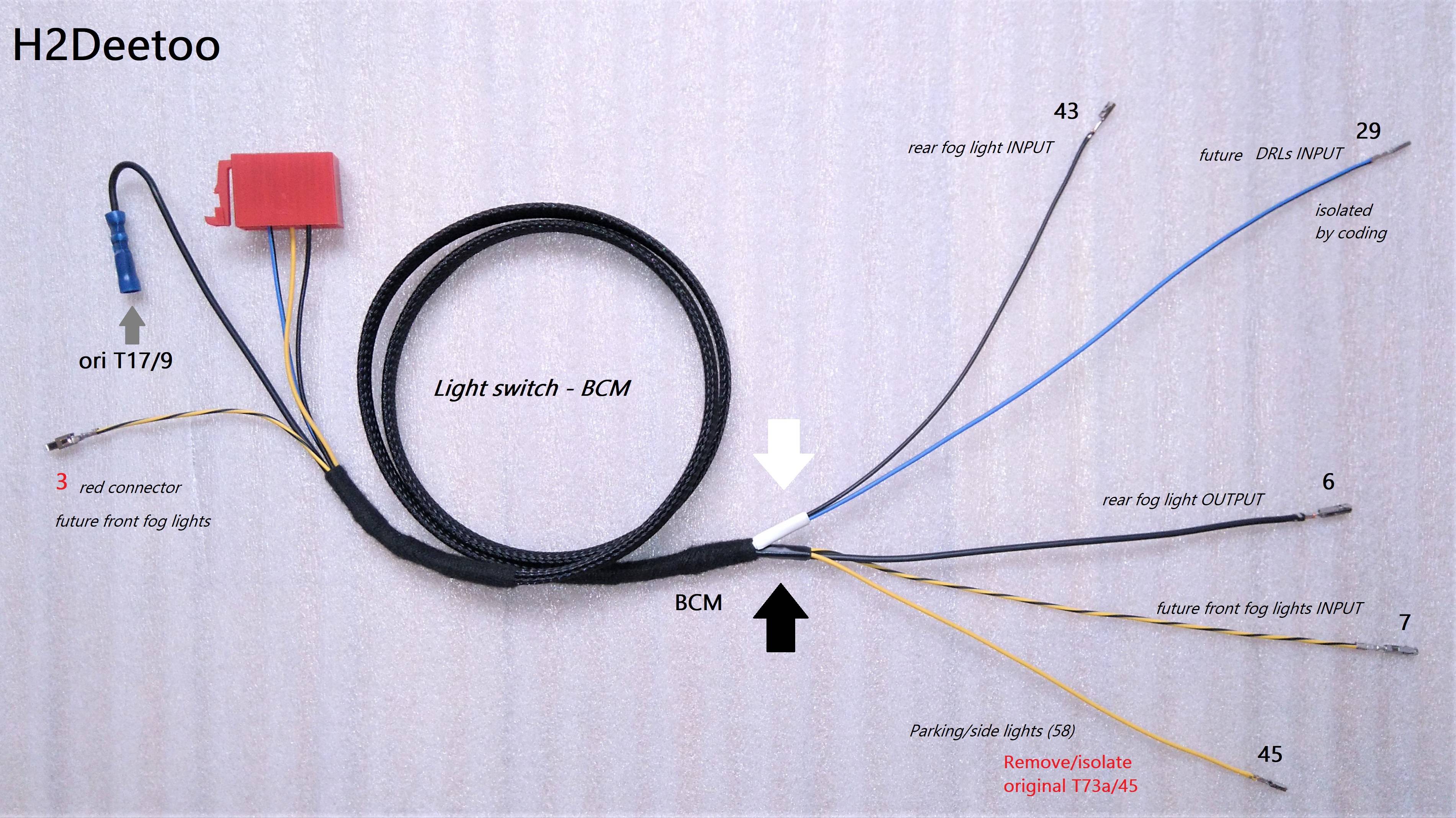 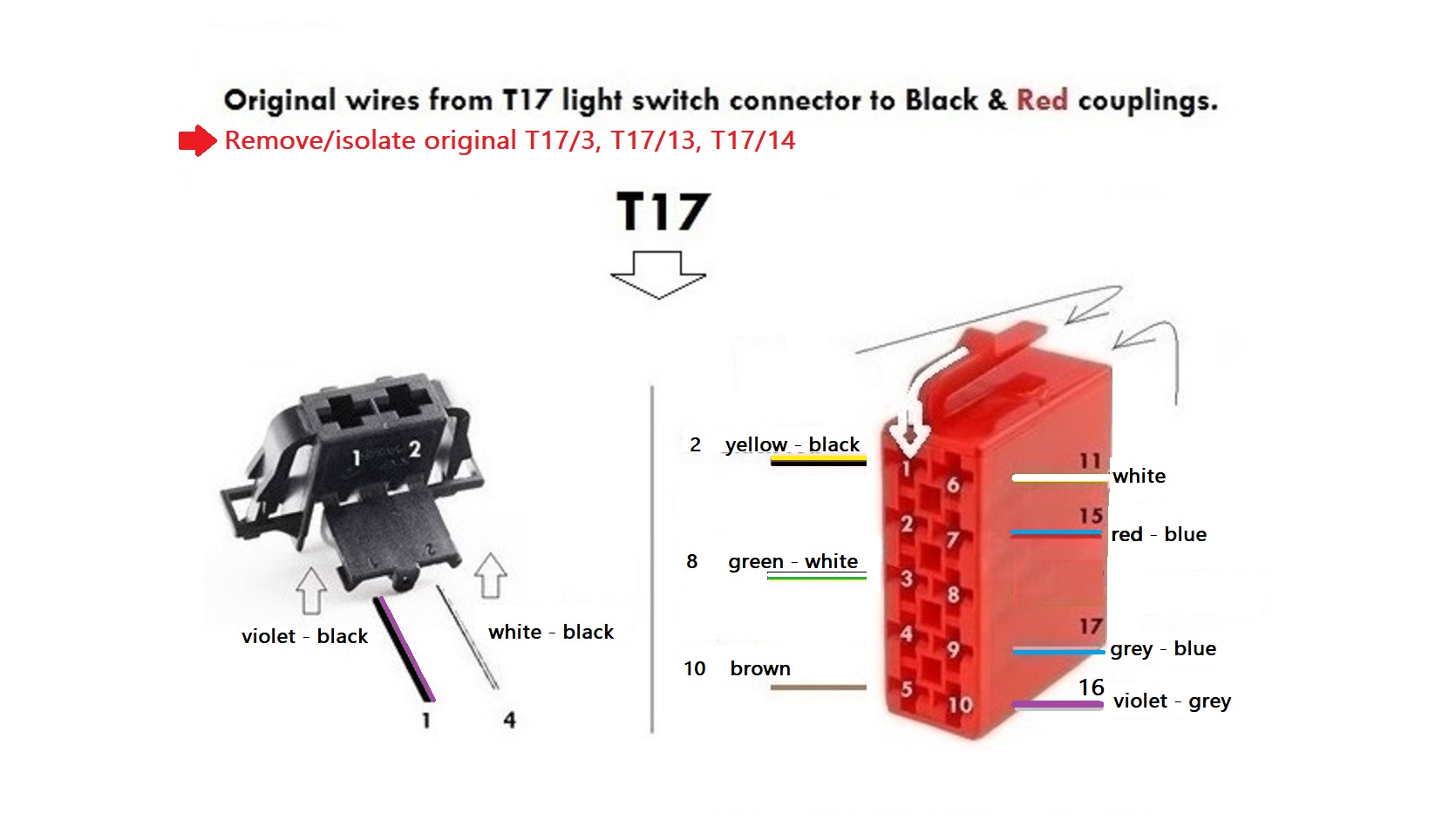 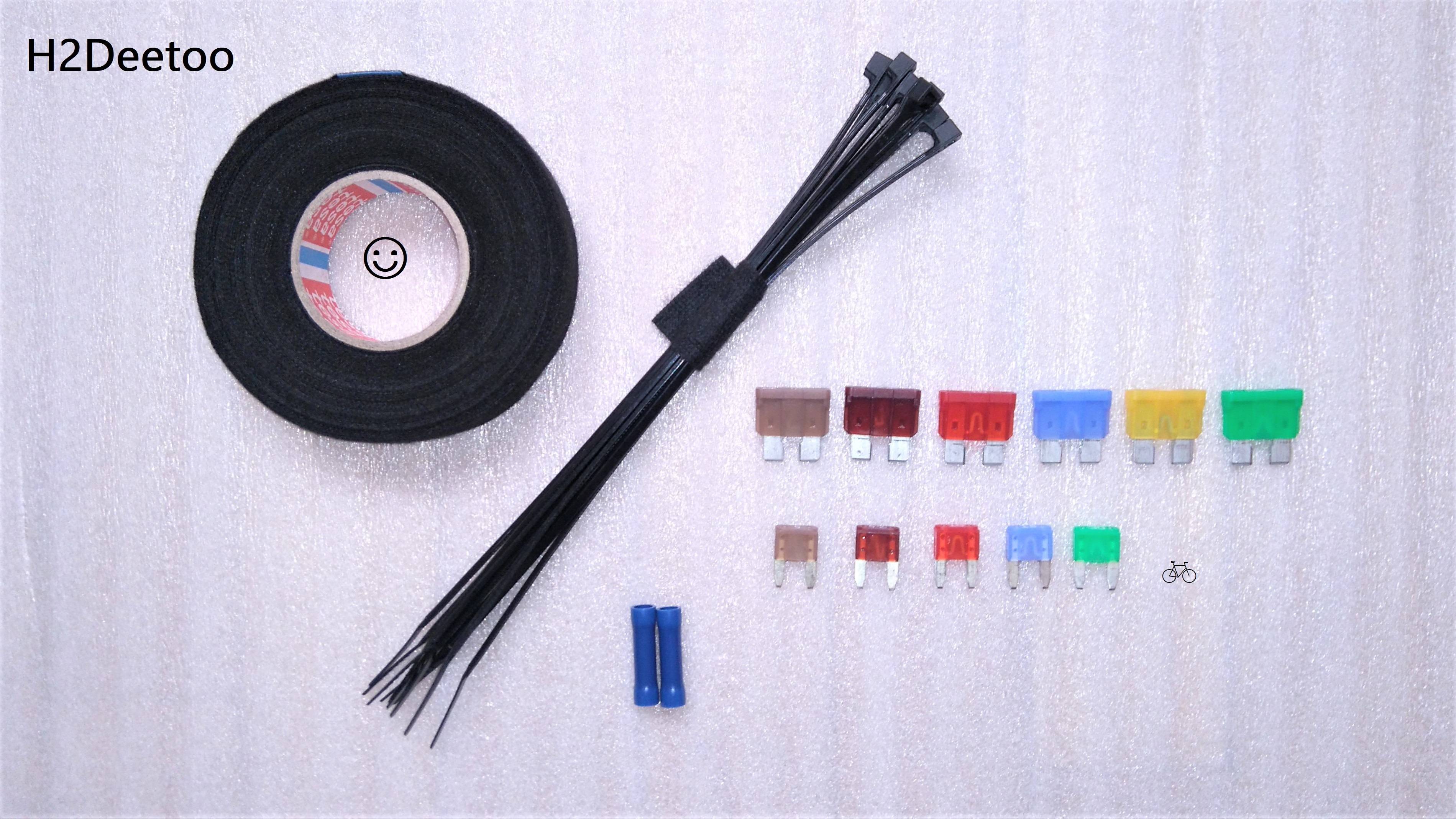 Can you also add a bridge for J33? I could use it for another + 30a connection point in fuse box.
Of course I'll pay the exstra cost.
Contact me by PM for payment details.


I've been away for a while due to some health issues.
I've had some major down time, but graduately picking this up again

Finally got around to finish the last wires for parking lights control control, and the BCM is now error free

Next light change will be the front fog lights.

In the mean time I have also added ambient light and flasher(turn) signal wires in both doors, to be able to place side mirrors with flashers and enable background illumination in the door switches. 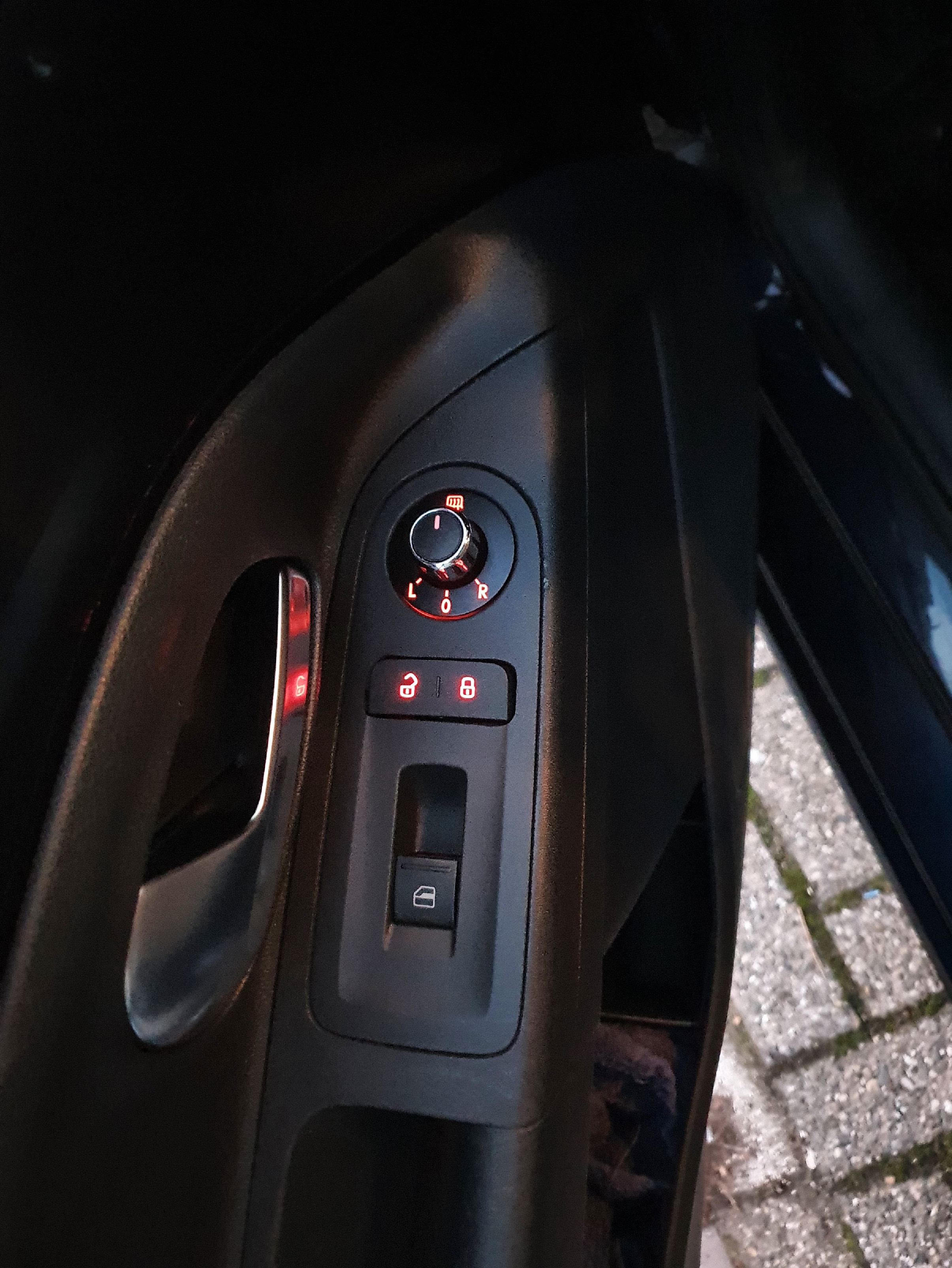 Now waiting for the rest of the parts...

The window switch backlight is missing, and the central locking switch looks like it came from other worlds ...
We deserve a slight explanation in this regard.

After doing some research it seems its fairly easy to fix button illumnination in VW UP and co:
- Mirrorknob -> Just swap it with that of a Polo, same connector so straight fit.
- Central lock switch -> You can use switch of a Transporter T6 7E0962125B, same connector so straight fit.
- Window switches -> Open them, solder missing led and resistor to pcb, and then use switch heads from Golf6 because they allow light through them.

The window switches I ordered for Gofl6 haven't arrived yet, that's why they're still dark (but the led is already in place and shining).
The T6 switch had me misguided a little... the connector does fit and it looks simimlar to the UP switch but it just won't fit properply.
Solution is to cut a little bit from the top frame.
It was my first time cutting/milling, so I am pleased with the result, however I'm sure with better equipment I can do a better job.

Excellent! thank you very much for the explanation / info.

Finally had some time today, and luckily the weather was perfect also, to reconnect my front and rear fog lights to the BCM (instead of the light switch).
The front fog lights are now under BCM control and this allowed me to enable static corner lights through my fog lights.
Very nice 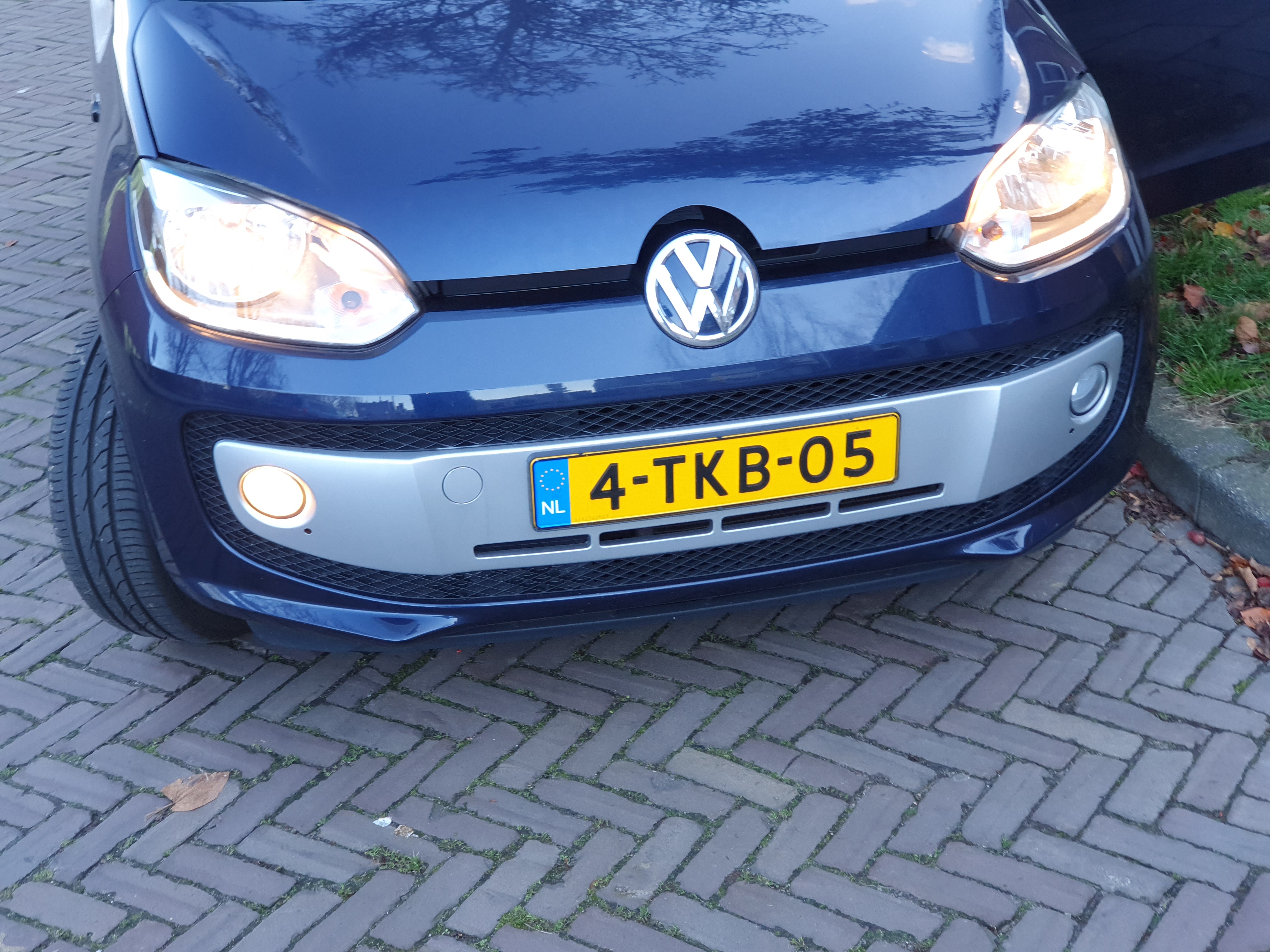 Basically I did the following according to the info provided on this forum (mainly by ciclo):

T73b/11 is the power input for the fogs and DRLS which was already present in my car (black/gray 1mm).
I left it as-is for now, but I plan to figure out where it comes from and how it is fused.
If I can't find out, then I will add a new wire from 30+ fused with 15A as recommended.
(Fuse SC50 was removed in the process, but can be used now for the 15A fuse I mentioned here above.)

Next job would be to reconnect the DRLS to the BCM.
After that mean beam using relay and auto light wiring as provided by ciclo!