The VED is going up in April 2020, suddenly started getting pop advertising to save money before the increases etc from dealers.
Basically going from the outdated NEDC CO2 ratings to more real world WLTP CO2 ratings.
I’ve not found much about the actual costs of the rise, but have found this;
Currently a polo Gti is about £210 for first year VED.
VW are still using the NEDC ratings for costs in brochures/websites etc but in the small print basically it says there is a new method but we are not using it yet.
So, I did find out (the figures vary on options etc as so many factors that change emissions)
The polo Gti is currently 138g/km but under the new WLTP ratings it pushes it up to 159g/km.
So that would mean from what I have found (please don’t treat this as gospel as the information is sketchy)
The polo would go from £210 to £530 for first year VED on 1st April 2020? Is that right?
If I’m wrong, please correct me.
I could ring a dealer, but usually it’s like trying to pull teeth, so would rather not.
It seems to be Diesels which are hardest hit by these changes coming.
Another nail in the coffin for the motor dealers, all seem to be struggling to shift vehicles in quantities they were used to, quite a lot around my way are amalgamating or closing down altogether.
Top

It looks right to me, based on official GOV.UK website.

You'll never see it as money coming directly out of your pocket, it'll be within the on the road RRP price. Thereafter for subsequent years, you'll pay the standard rate (£145 a year currently?).

I wouldn't be surprised to see a big Polo price hike when the MK8 Golf comes in - those Golf prices will be going up and VW will probably put the Polo prices up to bridge the otherwise widening gap between polo and Golf.

Forgive my ignorance but what is VED? Do you guys need to pay this every year?

Here in ZA we just renew the licence of our vehicles every year, no problem ... no MOT or the like.
Top

Vehicle Excise Duty (Car Tax or Road Tax), yes we have to pay this annually.
Top

It's definitely not about value.

Under the pre 2017 banding based on CO2, my 2013 Golf GTD was £20 a year to tax. My wife's 1.6TDI Audi A1 was £0. But you still had to apply for it annually or you'd get threatening letters off the DVLA threatening you with court action if you didn't pay your £0 VED.

Too many cars were extremely low or free VED, so the rules changed for new cars - you'd get proportionally stung once for how polluting your car is and then everyone pays a non-standard amount like £140 per year thereafter (except the luxury car tax for those over £40k RRP, where you get hit hard for 5 years).
Top

My dealership paid the first year road tax for me. Is this standard procedure?
Top

It is part of the on the road price. Unless they gave you discount specific to the amount of the VED, the dealership didn't pay - you did.
Top

It is part of the on the road price. Unless they gave you discount specific to the amount of the VED, the dealership didn't pay - you did.

There's me thinking I saved a bit of money...

Hi new member here, thanks for the board it is full of interesting information.
Back in March I ordered a GTI from a lease company which was due for delivery mid-August. Now they are saying end of August but I wonder whether it is here and the finance company want them to wait for a 70 plate, however...
The finance deal assumed a first year VED of £540 based on the publicised WLTP emissions of 154gm co2. Now the lease company are wanting an extra £330 and are saying that the car is now in the next band up i.e. 171-190gm co2.
This is the first time that I have leased a car and I am assuming that I will never see the registration document which I think has the taxation information on? So I am wondering if anyone has recently taken delivery of a GTI can confirm what the emissions now are and therefore what the first year VED should be?
Thanks in advance.
WRL
Top

The pictures below are from the VW configurator and the current price list for the Polo GTI+ which clearly shows the emissions are 160g/km; 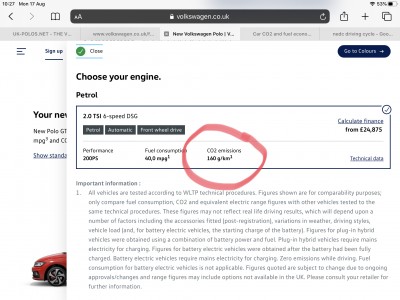 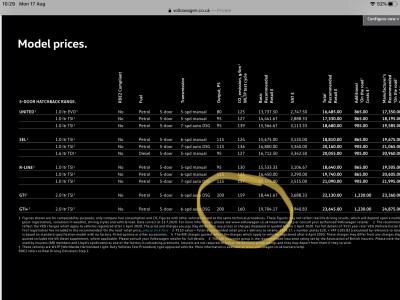 Under the previous NEDC emissions test procedure, the GTI+ emissions were measured at 138g/km, which put it in the 131-150g/km emissions band and the first year VED was £210. So the lease company is correct that the first year VED rate has increased by £330. However, from what you’ve said, your finance deal already reflects this increase, so you shouldn’t have to pay a further £330.

Presumably, if your finance deal assumed the higher first year VED of £540, this is specifically shown somewhere in the paperwork, in which case I’d be pointing this out to the lease company.
Top

Thanks for the reply. When I went back through all the paperwork they did list the car as emissions of 138gm CO2 which as you say explains the £330 as last year's rate would have been 210 compared to 540 now (I was a bit confused as this year's rate for 138gm is 215). It doesn't reflect the conversation I had with the salesperson which is disappointing, but I have no record of that so I suppose I should have queried it at the time. Lesson learnt, might try another phone call though.
Even so I suppose it's less than £10/month over the term, and I thought that it was a decent deal to start with.
WRL
Top

My dealer took the cost of the increase, I forget the specifics but they increased their deposit contribution to cover it.
Top

To update my car is due to arrive soon and the VED is as expected at £540, luckily I managed to find the relevant e-mail that this had already been costed in to my deal so nothing more to pay, happy days.
Mind you I have spent the 'saving' (and then some) on booking a ceramic coating at a local place to protect paint and wheels, I reckon that this might pay for itself when it comes to handing the car back again.
Like many others I have waited 7 months from order to delivery so have had plenty of time to enjoy the anticipation, am looking forward to driving it now. A few days in the Lakes have been booked to try it out...

West Riding Limited wrote: ↑Sat Oct 03, 2020 6:19 pm Mind you I have spent the 'saving' (and then some) on booking a ceramic coating at a local place to protect paint and wheels, I reckon that this might pay for itself when it comes to handing the car back again.

When you say "handing back", I'm assuming you mean it's PCP or lease.
In which case, sorry to pee on your parade, but your ceramic coating won't earn you a dime more.
Obviously it would compared with a neglected car, but not compared with a car that has maybe been put through carwashes all its days and is generally clean and tidy, but not a mirror finish.
PCP/lease companies really aren't impressed with cars that have been looked after in any 'special' way - sorry....

This applies to people who get cars valeted to hand back - complete waste of money, chuck it through a carwash and hoover it yourself.